Posted by admin on August 06, 2020
capodimonte / Comments Off 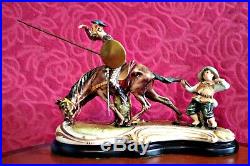 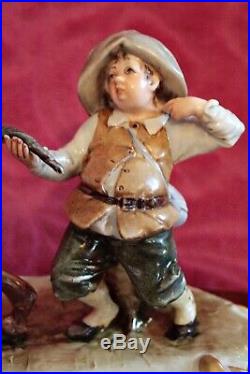 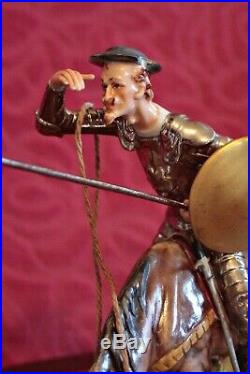 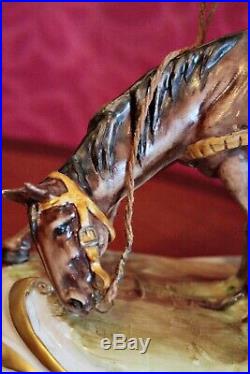 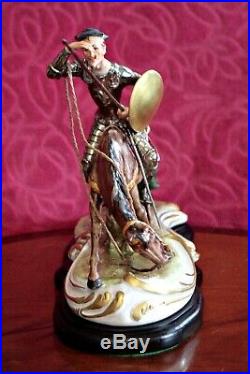 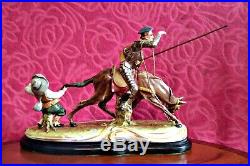 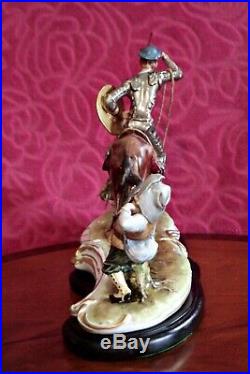 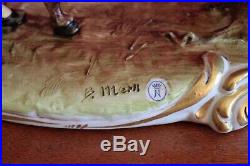 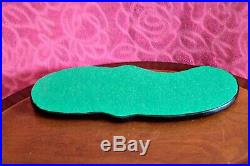 Welcome to my shop. Great Items Great Prices. Here for sale is a lovely Vintage Large Very Rare Capodimonte B. Merli Porcelain Group Figurine’Don Quixote and Sancho Panza. THE LEGENDARY “DON QUIXOTE AND SANCHO PANZA”. BEFORE GETTING TO THE DETAILED DESCRIPTION OF THE FANTASTIC PIECE IN PORCELAIN, TELLING THE STORY OF THE LEGENDARY “DON QUIXOTE” IS ALWAYS GOOD. The protagonist of the story is a Spanish hidalgo named Alonso Quijano, morbidly fond of chivalric novels, reading which he devotes himself to in his moments of leisure. The readings condition him to the point of dragging him into a fantasy world in which he convinces himself that he is called to become a wandering knight and sets out on a journey, like the heroes of the novels, to defend the weak and repair the wrongs. Alonso becomes the Knight “don Quixote” and starts spinning for Spain. In his madness, Don Quixote carries a local farmer Sancho Panza, which promises the Government of an island provided the face like a Squire. Like all knights errant, Don Quixote feels the need to devote to a lady his exploits. Will choosing Aldonza Lorenzo, a beautiful peasant girl her neighbor, which he transformed into a noble Lady and renamed Dulcinea Toboso. Unfortunately for Don Quixote, the Spain of his time is not that of chivalry, nor that of the picaresque novels, and the only hero left the adventures are very little. His visionary obstinacy pushed him to interpret reality with new eyes. Will then start exchanging the windmills for Giants from rotating arms, the puppets for demons, the flocks of sheep with enemy armies. Will fight these imaginary enemies resulting always soundly defeated, and arousing the laughter of the people who attend his foolish actions. Sancho Panza, for its part, will in some cases the rational counterpart of the visionary Don Quixote, while in other situations will share her despite the antics of master… The legendary “DON QUIXOTE AND SANCHO PANZA” in Capodimonte Porcelain made and signed by Maestro “MERLI” one of the most great sculptors of the 70s, in fact this model dates back to that period. Admire the photos carefully, it is an exclusive porcelain, both for its realism and for its exceptional artistic workmanship. Note the armor of the “DON QUIXOTE” really looks like metal, instead it is silver-colored porcelain, while the long spear is actually metal. Exceptional the face of the “DON QUIXOTE” with his bizarre profile, looks like a wandering knight grappling with another of his visions. Very nice and well done face very expressive, funny, and tired of “SANCHO PANZA”. To conclude the beautiful horse, held back by the great physical power of SANCHO PANZA. The figurine with the basement is 24 cm in height, 40 cm in width, 13 cm in depth. The figurine appears perfect, without any chips, cracks or crazing. It has been kept in a smoke free home. Every week my store is complemented by new articles. It will be packed to a standard to ensure as best as possible it’s safe arrival. Your continuing satisfaction is very important to me. Thank you for trust & confidence. The item “Capodimonte (B. Merli) Porcelain Group Figurine’Don Quixote and Sancho Panza” is in sale since Saturday, February 1, 2020. This item is in the category “Collectables\Decorative Ornaments & Plates\Figurines, Figures & Groups”. The seller is “m-antiques-m” and is located in Watton, Norfolk. This item can be shipped to United Kingdom, Austria, Belgium, Bulgaria, Croatia, Cyprus, Czech republic, Denmark, Estonia, Finland, Germany, Greece, Hungary, Ireland, Italy, Latvia, Lithuania, Luxembourg, Malta, Netherlands, Poland, Portugal, Romania, Slovakia, Slovenia, Spain, Sweden, Australia, United States, Bahrain, Canada, Japan, New Zealand, China, Israel, Hong Kong, Norway, Indonesia, Malaysia, Mexico, Singapore, South Korea, Switzerland, Taiwan, Thailand, Bangladesh, Bolivia, Brunei darussalam, Egypt, Guernsey, Gibraltar, Guadeloupe, French guiana, Iceland, Jersey, Cambodia, Liechtenstein, Macao, Monaco, Martinique, Nicaragua, Pakistan, Paraguay, Saudi arabia, United arab emirates, Chile, Bahamas, Costa rica, Guatemala, Honduras, Jamaica, Kuwait, Panama, Qatar, Trinidad and tobago, Uruguay, France, Bermuda, Barbados, Cayman islands, Jordan, Sri lanka, Maldives, Oman, Reunion, South africa, Ukraine, Colombia.